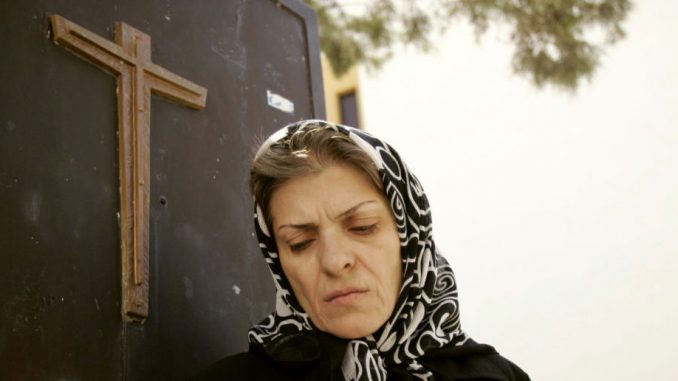 The Islamic Republic of Iran imposes austere laws towards all women. For example, the enforcement of the hijab displeases many women in Iran, as it restricts their freedom to express themselves. One lady said, “I am a Muslim, but I don’t like the way that the government is forcing us to do it and that’s why when we travel, we get rid of it.” Time and time again, Iranian women revolt against the government by publicly stripping the garment off their heads, to the point where the government took extreme measures and implemented prison sentences, fines or flagellation. Women now wear the headscarf in a ‘Baddhi-jab’, a rising fashion trend sweeping through Iran, where a majority of their hair shows, but a headscarf is still worn in accordance with the law. For Christian woman, however, they face additional scrutiny.

Christians may publicly practice their faith in Iran provided their family was Christian before the 1979 Islamic Revolution, but are nonetheless heavily monitored by the Ministry of Islamic Culture and Guidance and by the Ministry of Intelligence and Security (MOIS). Students in Iran are mandated to take Islamic study courses, and no other religions can be taught. Islam predominates as the main practice in Iran. Anyone who converts from Islam can face severe punishment, such as jail time or flagellation.

Recently, the number of Christian converts in the region has grown as more citizens become curious about the words of Christ, a majority of whom are women. As Iran pressurizes strict cultural protocols among women, many seek to find self worth and freedom through Christianity. Underground churches are estimated to congregate around a million converts. Unfortunately, many new Christ-followers must keep their new found faith a secret.

Nadia, a Christian convert, recounts the moment another convert expressed the joy of finding God through Jesus. The covert provided her with a Bible, and invited her to an underground church. Nadia became intrigued as she learned more about the faith, finding her purpose in life. Nadia shared,

“Reading the Bible was totally different from reading the Quran. Every time I read the Quran, I felt fury and concern about my future. Whenever I prayed to God, I always felt like I was far away from him. But when I started reading the Bible, it was so wonderful. I never heard those things about God before, God was really close to me. In the Bible, I believe that God revealed himself to me.” The MOIS considers underground churches a security threat. In May 2020, the Irani Parliament approved article 500 of the Islamic Penal Code, citing punishments Christian converts may face if found guilty of spreading so-called ‘propaganda messages.’

“Reading the Bible was totally different from reading the Quran. Every time I read the Quran, I felt fury and concern about my future. Whenever I prayed to God, I always felt like I was far away from him. But when I started reading the Bible, it was so wonderful. I never heard those things about God before, God was really close to me. In the Bible, I believe that God revealed himself to me.”

Nadia no longer keeps her faith undercover. After leaving Iran, Nadia made her way to the United States, where she openly practices Christianity with her family. Nadia never wanted to leave behind her home country, but knew she needed to protect her family after converting. “Leaving Iran was really hard because we had to leave behind our parents, our friends, our family, and our property. It was very hard at first. However, when you find out what it’s like to be in a free country, it becomes easier,” she said.

Mary Fatima Mohammadi, an open Christian convert and human rights activist in Iran, encounters frequent abuse from Iranian authoritarian figures. To the government, Mary is a ‘moral threat.’ At one point, she was even arrested by the morality police for supposedly miswearing her hijab. More recently in April 2020, the Iranian police arrested her after attending a peace protest. During her sentence, Mary was sent to Qarchak Prison, notably known for abusing women’s rights. Mary reported that while there she was strip searched twice and mistreated by the guards. She was repeatedly questioned about her faith by a Judge. After her sentencing, Mary continues her activism online alongside her supporters also protesting for freedom among Christians and others in Iran. Unfortunately, due to her activism and arrests, Mary has difficulties finding work.

For many Christian women, especially converts, finding work is nearly difficult. In some cases, family members mistreat Christian converts through abusive tactics. Some women are forced to leave their families with nowhere to go. A woman shares her personal testimony on the matter, saying, “My heart is really breaking for the women there, especially when they become Christian. They go through extreme persecution and experience such poverty. No one is helping them.” Christian and Muslim women are valued differently in Iran. Despite the overall oppression of women, Christian women hold less rights than Muslim women in the region.

Iranian Christian women like Mary bravely lead the battle against religious oppression. Having Christian women represented within parliament is crucial for the survival of the Christian faith in Iran. On Women’s History Month, it is important to commemorate the hard efforts Christian women of Iran put forth to establish a more equal society. Iranian Christian women are essential for campaigning for change within the country, and deserve more freedom to diversify the Iranian Parliament. Women of Iran amplify their voices to spread the gospel, knowing the consequences awaiting them. Regardless of the harsh suppression against the Christian communities in Iran, the women are willing to risk much for Jesus Christ, the Son of God.

The perception of women from evangelical men

Psalm 48.9
We have thought of thy loving-kindness, O God, in the midst of thy temple..
King James Version 1611, American Edition