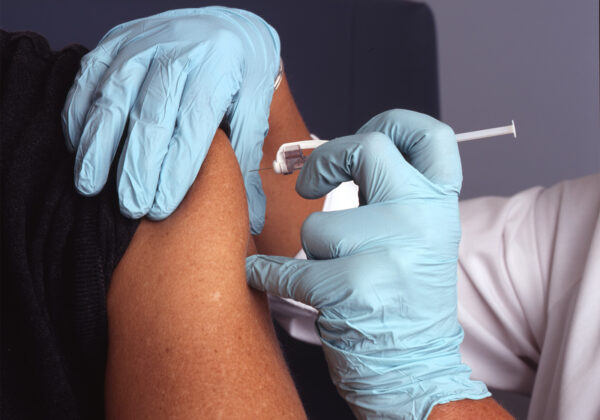 David Fleshler provides a pretty good piece of reporting on anti-vaccine attitudes among white evangelicals: “Florida evangelicals on vaccine: Right thing to do or mark of the beast?”

The “mark of the beast” stuff was utterly predictable as the reaction some white evangelicals were going to have to the vaccine because it’s the reaction those folks have had to everything in the past 40 years — from bar codes in supermarkets, to credit cards, to ATMs, to the DMV. It’s not surprising that Fleshler’s tour of Florida evangelicals included some examples of that Lindsey/LaHaye End Times folklore.

I’m almost surprised not to have heard more of that. (I mean, it’s still early, but I’ve scarcely even seen any right-wing End Times prophets accusing Joe Biden of being the Antichrist — and he’s a papist!)

That form of End Times delirium is ebbing, I think, partly because it’s being replaced by a more efficient and explicit form of right-wing indoctrination, as Fleshler discusses with a sociologist from Tim LaHaye’s hometown:

Much of the anti-vaccine sentiment comes less from religious beliefs themselves than from the right-wing political convictions of many evangelicals, whose historic anti-elite outlook makes it easier to question the advice of scientists, doctors and political leaders, said John Evans, professor of sociology at the University of California, San Diego, and an expert on the relationship between science and religion.

“A lot of this is that white evangelicals tend to be conservative Republican Trump supporters,” he said. “They watch a lot of Fox News. And therefore they will take on the perspective of Sean Hannity and Fox News and come up with some sort of religious rationale. But what’s really driving things is they’re conservative, Trump-style Republicans.”

There’s no need to work through LaHaye’s baroque allegory of Bircherism-as-“Bible prophecy” when you’ve already got a media ecosystem feeding people straight-up Bircherism.

Another part of this, I think, is the shift toward postmillennial-ish ideologies, particularly in the charismatic and Pentecostal branches of white evangelicalism where you’re more likely to encounter dominionism or reheated Reconstructionism or some other variant of crypto-theocratic white Christian nationalism rather than the pessimistic fatalism of 20th-century Last Days “Bible prophecy” nonsense. You can see that in Fleshler’s survey, where the really bonkers (even by Florida standards) responses to the vaccine come mainly from the MAGA-“prophets” of charismatic/Pentecostal/INC churches.

• But the charismatic/Pentecostal stream of white evangelicalism does not have a monopoly on bonkers-stupid responses to the vaccine and the pandemic. Consider, for example, the fiercely anti-charismatic fundamentalist icon John MacArthur: “COVID-Denying Pastor: Wearing Face Masks Means Promoting a Secular Religion.”

MacArthur’s fiefdom in Southern California has been spiraling through an accelerating cycle for the past year: Denialism, outbreak, cover-up, litigation. We’re on the second or maybe third iteration of that cycle now with MacArthur back in court, fighting again for his “religious liberty” and his Free Exercise right to expose and infect as much of his congregation as possible.

The fact that MacArthur has recently been railing against the very idea of religious liberty for the non-elect and that he’s spent years condemning “rights-based” arguments only underscores the feverish dishonesty of everything this man has been saying since the pandemic began.

A big part of MacArthur’s shtick has always been his insistence that fundamentalism should avoid “legalism.” The nuances of that intramural fundie argument get arcane and weedy and it’s hard to convey all the shades of what fundies mean by “legalism” for non-natives. (It has to do, among other things, with the assumption that Galatians is a Pauline polemic against 16th-century Roman Catholicism.) This is expressed in his legal argument against public health and hygiene restrictions, in which he writes:

If you want to see what this rule against “extrabiblical religious rules” looks like in practical terms, check out the Student Handbook for MacArthur’s mostly accredited university. The first half is a long throat-clearing preamble arguing that this is not a rulebook because we’re not legalistic here. The second half is a rulebook. And it’s a rulebook in which every rule includes an elastic clause involving “submissive dependency” with the divine right of authority figures. So, yeah, MacArthur’s church does not “forbid the wearing of masks,” but it forbids the displeasing of the senior pastor, and masks displease the senior pastor. So.

That Student Handbook includes some very strict rules about social media and “electronic media,” rules that John MacArthur himself has almost certainly violated given the amount of QAnon nuttiness he’s credulously swallowed and rechristened as “gospel.” I’m sure that didn’t involve MacArthur surfing the message boards at 8kun or watching the YouTube channels of the many Q apostles. My guess is he’s just using Facebook, restricting his follows and followers to only the most pious, and thus inviting a steady stream of the toxic Christian nationalist disinformation that Facebook’s algorithms provide for users who seem to enjoy engaging with that stuff. And it’s not possible to spend any amount of time in “Christian Facebook” without violating MacArthur’s non-rule rule of “Always seek to avoid gossip and slander (1 Peter 2:1) and demonstrate the fruit of the Spirit when writing or talking to others (Galatians 5:22-23).”

You don’t end up as a pandemic-denialist unless you have been seeking out gossip, willfully embracing slander, and knowingly bearing false witness against your neighbors. John MacArthur needs to repent of all those sins.

• Those sins — the moral choices that make one a willing captive of conspiracy theories and Satanic baby-killer nonsense — tend to be social sins. It takes two to gossip, and it takes more than two to sustain the willful false pretenses of conspiracy theories. That requires a group — a community of players to keep the game alive. And that, in turn, requires associating with those also playing the game while scrupulously avoiding those who are not.

This is why I sympathize with this editorial from the Buffalo News, but I’m not optimistic it will work: “Trusted advisers need to help persuade reluctant evangelicals to be vaccinated.”

“The key to changing minds has been to bring trusted advisers into the task,” the paper’s editorial board writes. “We all need to do our part. Evangelicals who understand that have work to do with their fellow believers.” They want to see trusted, influential white evangelical leaders encouraging their followers to get vaccinated.

That makes sense. The problem is that once those trusted, influential evangelical leaders start saying that, their anti-vaccine followers will cease to regard them as trusted. (“Trusted,” for those playing the game, means “trusted to maintain kayfabe at all costs.”) Here’s what I wrote about that years ago:

P&G had also collected an impressive array of letters from religious leaders — the archbishop of Cincinnati, Billy Graham, Jerry Falwell, among others — all of whom urged their followers not to believe this stupid, stupid lie.

In retrospect, this desperate, shotgun appeal to religious authority demonstrated why the dossier itself was probably futile. It was an acknowledgment that the people they were attempting to convince were beyond the reach of mere fact or reason — people who did not find reality compelling. The only hope of persuading them, then, was to call upon religious leaders from across the spectrum in the hopes that the pronouncement of one of these random bishops and evangelical pseudo-bishops might be regarded as trustworthy.

If you’re forced to resort to such an attempt then you’ve got to realize that it’s not likely to work either. Any audience so far gone as to require this sort of argument is also likely to have already adopted the mechanisms of self-reinforcing stupidity. Thus if they read that Billy Graham denies the rumor, their response won’t be “Oh, OK, Billy Graham. I trust him,” but rather “OMG! Billy Graham is in on it too!” (cf. “biased media”).

The Buffalo News editorial is accompanied by a picture of Southern Baptist President J.D. Grear. Like Russell Moore, Grear is often cited as a trusted and influential leader in the SBC. But, like Moore, he is also a widely distrusted leader in the SBC who inspires reflexive opposition from a big chunk of that denomination who recognize that he’s not playing the same game of make-pretend they are and thus denounce him for being “in on it too.”

And, as I’ve said before, “When conspiracists accuse someone of being ‘in on it,’ what they actually mean is that person is, disappointingly, not ‘in on it’ — that they have not accepted the bounds and the rules of the game they know themselves to be playing. (This is true of conspiracism and of just plain racism too.)”