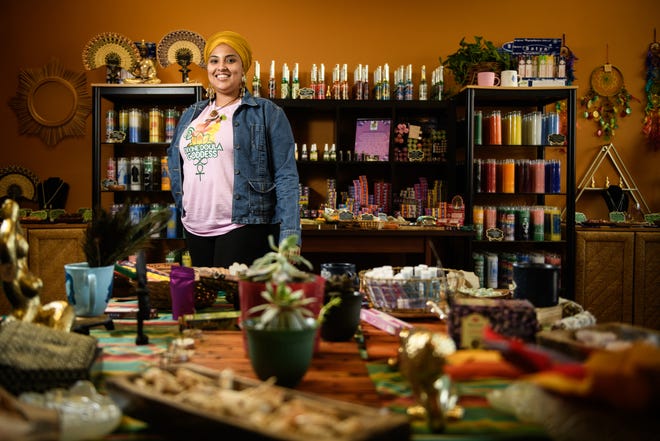 The shift, mainly within younger generations, toward spirituality rather than religiosity can be seen in Fayetteville.

The Rev. Kelli W. Taylor, chaplain and vice president of religious life and community engagement at Methodist University, said church research suggests a shift among younger Black Christians. The move is from being religious to being spiritual, when religion is defined as adhering to a specific set of organized beliefs and practices, while spirituality suggests a more individual approach to faith and practice, she said.

Stacye Blount, an associate professor of sociology at Fayetteville State University, talks about a difference between religiosity and spirituality.

“When we talk about religiosity, or what may also be termed religiousness, we are talking about how the measurement of one’s religiousness or religiosity connects to beliefs, practices, rituals in which people participate,” she said. “With spirituality, people are searching for the sacred to try to find meaning in life and they are trusting in some higher power.”

With these definitions, Blount added, people can be spiritual but not religious and vice versa.

Shatara Het Heru Bey is using her business Divine Doula Goddess, to not only assist women givinge birth but to also help people on their spiritual journey.

Het Heru Bey started her spiritual journey in 2009 after she was taught breathing techniques.

Five years ago, she went to an event called Mothers for the Earth that required her to get in touch with the land and connect with ancestors.

“That was just an eye opening experience on how in tune we are with the Earth,” she said. “It was so healing, it was so refreshing, it was cleansing. It was just so different and I had never experienced anything like that in my life.”

Blount said the shift toward spirituality swept through the younger Black generation, beginning with the death of Trayvon Martin. Martin, an unarmed Black 17-year-old, was shot and killed by a community watch group member who thought the teen looked suspicious wearing a hooded sweatshirt in the rain. The shooter claimed he believed Martin had a weapon. The teen, who was in the neighborhood visiting relatives and was coming back from a nearby 7-Eleven, was found to be in possession of only a bag of Skittles and a can of Arizona Iced Tea. The man who killed him was found not guilty of murder at trial.

“I think it sent them on a quest for some faith, a spiritual experience that centered them more within their ancestral origins,” she said. “I am inclined to believe that they are spiritual,m but I think they have had enough of organized religion, especially as they become more social-justice oriented.”

Taylor said she sees it from a different perspective on how younger Black generations view religion after spending time in the community. She said she doesn’t think they are completely abandoning organized religion.

Instead, Taylor said, she has seen evidence that Black students are dedicated to prayer and studying scripture but also have developed a sense of weariness.

“They are weary of prayer without action and scripture study that ignores the central message of the gospel that says you cannot say you love God and hate your brother or sister,” she said. “They want to engage the message of the biblical prophets who were social critics.”

Taylor agrees that the younger generation lean toward social justice.

“What I observe is more African American young people finding engagement and living out of their Christian convictions in civic organizations that are on the front lines of social justice rather than in the church,” she said.

Within the Black community, the use of crystals and burning sage have been seen as witchcraft or something sinister; a disconnect Blount says can be traced back to slavery.

“(Religion) was used as a mechanism of control because they used scripture to justify what they were doing,” she said.

Blount added that it isn’t clear to her why those who used religion as a form of control would think slaves would completely forget the traditions from their homeland. She said misconceptions of spiritual practices also are also connected to misinformation based on fear.

Het Heru Bey said she believes that the control and misconceptions taught about spirituality have had an opposite effect. She said she feels the need to share her spirituality with others in the Black community because it’s a birthright.

“It actually gives us more power, makes us feel even better about ourselves,” she said. “It makes us being able to see like another way of life and just know wholeheartedly that this is what our ancestors did.”

Blount said the exhaustion with organized religion caused millennials and Generation Z to look for a different path, which led them to conclude that spirituality isn’t negative.

“So once they do research, especially if they do research to the degree whereby they find out just how rich the faith traditions were of their African ancestors, and that desire to want to connect to that, then they find out, oh well there is really nothing wrong with burning sage,” she said. “It’s just been the way it has been explained to us and if you looked at a crystal you were dabbling into some occult practice.”

Akira Kyles can be reached at akyles@gannett.com.

Psalm 135.15
The idols of the heathen are silver and gold, the work of men's hands..
King James Version 1611, American Edition