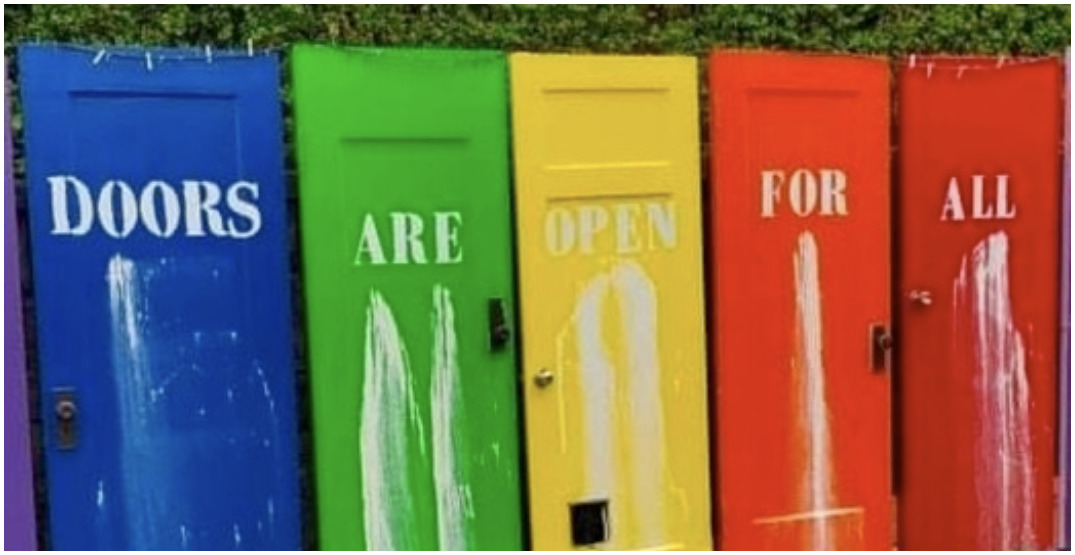 An art installation in celebration of Pride month at Shaughnessy Heights United Church, at 1550 West 33rd Avenue, was vandalized over the weekend, but the west side church isn’t fazed.

The art was inspired by a Connecticut church that installed something similar.

“It consists of seven doors, six of which are painted in the colours of the pride flag. The seventh door is painted as the progressive flag,” Rev. Dave Moors told Daily Hive.

“The six pride doors have the words ‘God’s doors are open for all.’ Lots of people stop and take photos on their evening walk,” he added.

According to Moors, the vandalism most likely occurred over the weekend. The vandals attempted to paint words over the doors and on the sidewalk, but through some divine intervention, their messages of hate didn’t last.

“Luckily, the rain made the paint run before morning came, I think. We saw large white streaks of paint down the door and on the sidewalk as well,” said Moors.

Someone had also left behind a wooden cross that was found resting against the door with the progressive flag.

When asked about the challenge that living in a progressive society poses when dealing with varying interpretations of the Bible, Moors said, “Our congregation is well aware of the more honest, authentic translations of the Bible and what the original languages were actually saying, instead of the English translation in the 1600s.”

“My message has been that Christians are allowed to disagree, but at Shaughnessy Heights United, we choose to use the Bible as a tool of love, and not a weapon of hate against people.”

“Let go of hatred, and use the Bible and our God-given love to love the whole world.”

The doors were repainted this morning, and have already seen lots of support and excitement from the community after the restoration.

Even when money is tight, churches have more resources than they realize

Psalm 136.9
the moon and stars to rule by night: for his mercy endureth for ever..
King James Version 1611, American Edition