Pope Francis has a message to consider from Lebanon’s evangelicals.

“We are not comfortable in our sectarian system, and thank God that we are not a part of the politics that led the country to collapse,” said Joseph Kassab, president of the Supreme Council of the Evangelical Community in Syria and Lebanon.

“We are not benefiting, and it hurts us like the vast majority of the Lebanese people.”

Last week the Catholic pontiff invited Lebanon’s Christian denominations to the Vatican for a time of prayer and reflection. Ten patriarchs, bishops, and church leaders gathered, as Francis encouraged them to speak with one voice to the politicians of their nation.

Lebanon has been unable to form a new government since its prior one resigned 11 months ago, following the massive explosion at Beirut’s port. As its Christian, Sunni, Shiite, and Druze political parties wrangle over representation, more than half the population now falls below the poverty line.

Following a default on national debt, personal bank accounts have been largely frozen as the Lebanese lira has lost over 90 percent of its value. The World Bank estimates the economic collapse to be among the world’s three worst in the last 150 years.

“We blame and condemn our Christian and Muslim political leaders equally,” said Kassab.

“We have to say this loudly.” 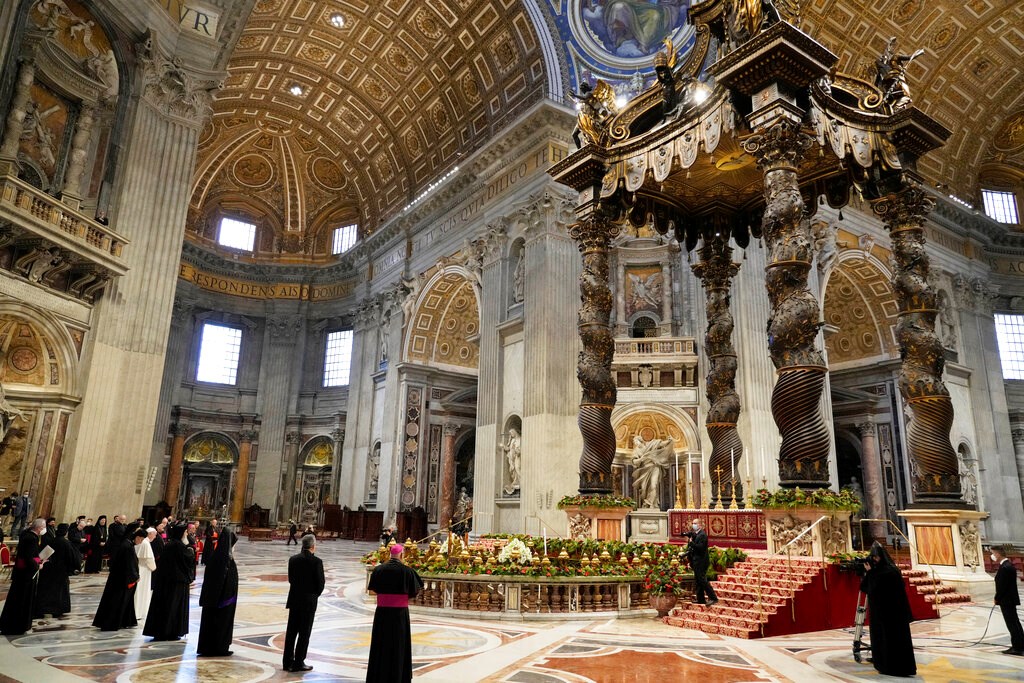 Pope Francis (left) attends a prayer with Lebanon’s Christian leaders in St. Peter’s Basilica on July 1, hosting them at the Vatican for a day of prayer amid fears that the country’s descent into financial and economic chaos is further imperiling the Christian presence in the country.

The nation’s longstanding sectarian system, however, works to recycle these leaders. Lebanon’s president must be a Maronite Christian, its prime minister a Sunni Muslim, and its speaker of parliament a Shiite Muslim.

The 128 parliament seats are divided evenly between Muslims and Christians, with one reserved for Protestants. But confessional distribution extends into ministerial and civil service positions, including the army, police, and intelligence services.

Each community seeks to maximize its interests, while being careful not to upset the sectarian balance.

“Positions are distributed by religious identity, not qualification,” said Kassab. “Francis called us to push our politicians toward the common good, but we are imprisoned in this system.”

Closed door discussions were frank, he said, but conducted with a brotherly spirit. There is no Lebanese consensus on solutions, let alone among Christians.

The Maronite patriarch has repeatedly called for an international conference to compel a political solution, as well as to ensure Lebanese regional neutrality. But AsiaNews reported that the Greek and Syrian Orthodox leaders have reservations, likely due to headquarters in Damascus.

Consequently, the pope sought to find the common denominator between the churches. This was identified as the urgent necessity for a government, and social assistance to keep Christians in Lebanon.

Currently “50 to 60 percent of our young people live abroad,” stated Samir Mazloum, the Maronite patriarchal vicar. “There are only old people and children left.”

The Vatican released no official statement, but Pope Francis’ closing homily served as an indication.

“Lebanon cannot be left prey to the course of events or to those who pursue their own unscrupulous interests,” he said. “It is a small yet great country, but even more, it is a universal message of peace and fraternity arising from the Middle East.”

Francis’ earlier visits with the Grand Imam of Egypt’s al-Azhar, a Sunni, and the Grand Ayatollah in Iraq, a Shiite, represent his attempt to secure good relations across the Muslim world. In Lebanon, however, there was some unease about the nature of last week’s Christian-only dialogue.

To assuage them, John X, patriarch of the Greek Orthodox Church of Antioch, met with the heads of the Sunni, Shiite, and Druze communities in advance of the gathering. This initiative, Kassab said, was roundly appreciated by the pope and Lebanese Christian leaders.

“We need to be a church that serves the Muslims,” he added. “We cannot exclude our partners in the nation.”

Despite the economic troubles, this sentiment is holding firm.

Lebanese dismiss the possibility of a return to civil war, which tore the country apart from 1975 to 1990. But those wounds were never healed, stated Bishop Michel Aoun of the Maronite church, with no confession of wrong. International pressure may help force a government, but the political system—adjusted after the war—failed to instill a sense of Lebanese unity.

So Francis prayed for it.

“We have seen our own lack of clarity and the mistakes we have made,” the pope stated during his closing homily. “For all this we ask forgiveness, and with contrite hearts we pray: Lord, have mercy.”

And specifically, he mentioned a failure “to bear consistent witness to the Gospel,” including missed opportunities for reconciliation.

The daylong gathering began at Casa Santa Marta, where Lebanese leaders joined the pope at his simple residence. He walked with them to St. Peter’s Basilica, where they recited the Lord’s Prayer. After about five minutes of silent meditation, the heads of denominations descended into the crypt, where they each lit a candle in front of an ornate Bible.

Left above was Charlie Costa, head of Lebanon’s Baptist convention, invited by Kassab as part of the evangelical delegation. Awed by the sense of history at the Vatican, he remarked that this cathedral was built with the indulgences that triggered the Reformation. Yet it also preserved Western Christianity throughout the ages.

Francis listened intensely during the sessions, speaking little, he said. And he received the Protestants respectfully, engaging them as an equal component of Lebanese society, along with the Catholic and Orthodox delegations.

“He is an amazing man,” said Costa. “Christians in Lebanon, evangelicals included, can learn from his humility.”

There was a consensus among the Lebanese leaders that they must.

“We forgot for a while about our differences,” said Kassab. “But if we leave the situation as it is, Lebanon is going to die.”

The evangelical report handed to Francis emphasized the necessity of freedom of conscience and belief, while maintaining good relations with the traditional churches and Muslim community.

Lebanese evangelicals would welcome the Vatican taking a leading role in international efforts to rescue Lebanon. Francis announced no concrete steps, but delegation members anticipate he will lead the charge to preserve the diverse, multi-confessional nation.

Will it remain sectarian in its political system? No one knows the details.

“Lebanon will be different,” said Kassab.

“We as Christians have to be prepared for that future.”