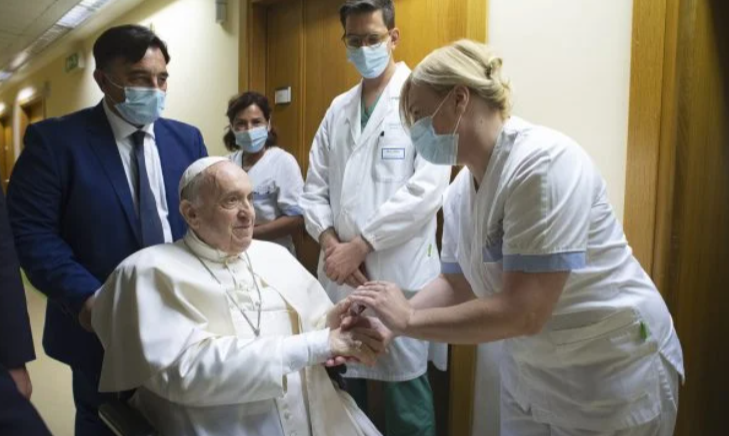 Although he appears to be recovering from his surgery, the hospitalization of Pope Francis marks the beginning of the end of his papacy. Time is running out. Francis is 84 years of age, and it will be miraculous if he is able to continue as pope for another five years.

Pope Francis seems to be recovering nicely from his July 4 surgery, when the 84-year-old pontiff underwent a three-hour procedure for diverticular stenosis. A Vatican spokesman says he will remain “a few more days in order to optimize his medical and rehabilitation therapy.”

But even with the best prognosis, age is catching up to Francis. Barring a miracle, he will only be expected to continue as pope for five or six years. We may look back at his hospitalization as the moment that marked the beginning of the end of his papacy.

If that’s the case, we will also be able to count incredible achievements.

As a pastor, Francis has caught the imagination of the world with his compassion and openness to all people. He has put love, especially love for the poor, center stage in his preaching of the gospel.

As a world leader, he has put his papacy squarely on the side of migrants and refugees. And he has been a prophetic voice against global warming and the excesses of capitalism.

And within the church, he has encouraged dialogue and a more consultative style of governance: Put bluntly, the Congregation for the Doctrine of the Faith no longer acts like the Inquisition it once was.

In short, Francis has rebranded the papacy for the 21st century with a pastoral, prophetic and inclusive voice.

Many bishops and priests in the Roman Curia and around the world think his election was a mistake and they are hoping for a return to what they regard as normalcy in the next papacy. They feel he has not emphasized dogma and rules enough, so they are not cooperating.

Yet Francis has treated these opponents with the gentleness of a pastor who hopes for their conversion. Any other CEO would simply replace those who are not on board with his agenda, but Francis refuses to fire people.

As a result, he has waited until curial officials and bishops reached retirement age. For such a strategy to have an effect requires a very long papacy, such as the 27-year reign of John Paul II, followed by eight years of Benedict.

During this 35-year period, John Paul and Benedict remade the episcopacy in their image. The litmus test was loyalty and orthodoxy as they defined it. Anyone who questioned the papacy’s position on birth control, married priests or women priests was disqualified. These bishops then revamped the seminaries that have produced the clergy we have today.

One of the best examples is the United States, where neither the U.S. Conference of Catholic Bishops nor the seminaries are bastions of Francis supporters. Bishops who embody Francis’ values make up only 20 to 40 of the 223 active U.S. bishops. And among the clergy, Francis receives his greatest support from older priests, who are dying off, rather than younger ones who are the future of the church.

Instead of taking to heart the axiom that “personnel is policy,” he left in place a Benedict appointee, Cardinal Marc Ouellet, as prefect of the Congregation for Bishops, the office that vets candidates for the episcopacy. The nuncios, who suggest episcopal candidates, were also trained and advanced under John Paul and Benedict, and for the first three years of Francis’ papacy, Archbishop Carlo Maria Viganò, an archenemy, served in that role in the United States.

As a result, even the American bishops appointed under Francis are a mixed bag.

Finding young candidates for the priesthood, meanwhile, who support Francis and want to be celibate is like looking for Catholic unicorns, and if you were to find some, they aren’t likely to be welcomed by conservative seminaries. As a result, the laity who are encouraged to come to church because they like Francis are unlikely to find him in their parishes or dioceses.

Reforming the Catholic Church takes decades, not years. If his papacy is reckoned a failure, it will be because Francis failed to replace or outlast the clerical establishment put in place by John Paul and Benedict. His papacy will only succeed if he is followed by popes who are in sync with his approach to Catholicism, and this is not guaranteed. He has appointed sympathetic men to the College of Cardinals, but conclaves are unpredictable as his own election showed.

Psalm 59.5
Thou therefore, O Lord God of hosts, the God of Israel, awake to visit all the heathen: be not merciful to any wicked transgressors. Selah..
King James Version 1611, American Edition